My excuse this time...

OK, here is what happened between this blog post and the last one. (Some of it, anyway.)

The second weekend in May was the annual Lithuanian Festival in Catonsville, Maryland, but it was also full of other demands on my time. My dance group was supposed to perform at the Maryland Faerie Festival, quite a bit north of Catonsville, and a couple of friends of mine were moving their stuff from one apartment to another in Hyattsville, near Maryland's border with the District of Columbia. As things worked out, the dance group agreed to perform on Sunday, so I figured that I could go to the Lithuanian Festival on Saturday -- getting out the door earlier than I normally do -- and then see if my friends needed any help when I got back.

As always, I had a great time at the Lithuanian Festival. Someone had brought in his collection of Lithuanian beer cans, and I was amused to see that some of the brands were named in honor of the great victory at the Battle of Zalgiris: 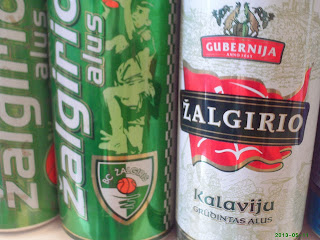 I really enjoyed the tasty potato pancakes fried up as a fundraiser for Malunas, the Baltimore-based Lithuanian dance group. 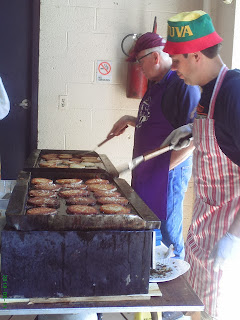 And finally this year someone was actually doing a marguciai demonstration and selling basic egg-decorating supplies: 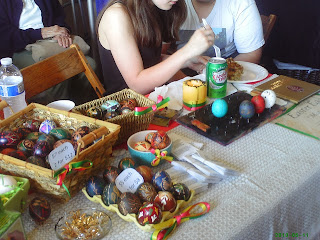 When I got home, I called my friends, whom I met in the SCA as Pedro and Devora, and asked them if they still needed help. Pedro answered the phone and said that they were all done moving stuff for the day, but he thanked me for my offer of help just the same.

It was the last time I ever spoke to him.

The following Thursday, Pedro had a massive hemorrhagic stroke. He had brain surgery to try to relieve the pressure on his brain, but to no avail. He passed away on Memorial Day at the age of 42.

I had met Pedro and Devora at my very first SCA event. Later he became my heraldry teacher; I looked up to him as if I was his protege, even though he never became a Pelican (he was the protege of Master Herveus, one of the SCA's top heralds). Still later, as his interests shifted toward his old love of amateur astronomy, he joined my science-writing group and we were once both on the same "trivia night" winning team -- our intellectual strengths and weaknesses complemented each other brilliantly (I didn't know which vegetable symbolized Wales; he didn't know which rock group had Paul Hewson for a lead singer).

Losing Pedro, and knowing that Devora had lost the love of her life, was like a giant punch to the gut in an otherwise good time of my life: I had been working a temporary job at the Smithsonian's National Museum of Natural History and cranking out freelance articles on the side. The loss has been hanging over me ever since, whether I'm practicing my heraldry, looking up at the night sky, or catching one of Devora's Facebook posts.

I didn't go to Pennsic War this year, not because of a lack of money, but by a time squeeze -- since Pennsic started earlier than usual, it overlapped the "crunch time" at the end of my Smithsonian contract. I missed Pennsic terribly, of course, but as we say in the SCA, real life always comes first.

So, now that the weather is getting cooler again, I'm trying to get back into the groove. Storvik has a new Baron and Baroness who have a lot of ideas for things to do. The Kingdom of Atlantia's Twelfth Night will take place in Storvik next January, which also happens to be the 10th anniversary of my first-ever SCA event. Anniversaries tend to make me pause and take stock of where I've been and, more importantly, where I still want to go. I may make some posts on this topic in the near future.

In the meantime, I know where I'm going this weekend: to the next Slavic University, again in the Kingdom of Aethelmearc. Woo-hoo!

Finally, congratulations to Lithuania for its election to one of the non-permanent seats on the United Nations Security Council. And for the second half of 2013, Lithuania holds the presidency of the Council of the European Union. Lithuania is truly coming of age as a 21st-century nation!
Posted by Patricia of Trakai at 2:26 PM 2 comments: