Perhaps it's a good thing that I didn't plan on teaching any classes at Pennsic XL this summer, as my car broke down while I was traveling up to Cooper's Lake. Since everyone I knew was already at War, and since I didn't have enough money for a rental vehicle, I ended up missing Pennsic entirely. :-( It's only thanks to the grace and kindness of a group of my friends, who collected some money for me and presented it to me, that I was able to afford the expensive repair bill and get my 15-year-old Pontiac back on the road.

At least I was able to attend the Kingdom of Atlantia's 30th-anniversary celebration earlier this month. For one of the gift baskets that were presented to the winners of the various competitions, I made a small pincushion embellished with a cross-stitch replica of the Atlantian ensign (the kingdom's arms without the crown and laurel wreath). Here's how it came out before I attached it to the pincushion: 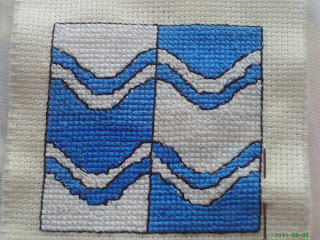 It had a few flaws that I'm not proud of -- especially the slightly different shades of blue and white. I hope the recipient, whoever he/she is, overlooks those details and enjoys the overall picture.

Anyhow ... I am getting ready for the next University of Atlantia session, which is tomorrow (Saturday, October 1) in the Barony of Bright Hills. I will be teaching a one-hour class called "Survey of Medieval Lithuania" at 3:30 p.m. I have only two student pre-registered for the class, but I suspect that I'll get more attendees, because I also suspect that a lot of people haven't pre-registered for anything.

I'm also trying one extremely non-medieval innovation: PowerPoint slides. I wouldn't ever try a slide show at Pennsic, because the inside of the A&S tents doesn't get very dark in the daytime (and the insides of the red and yellow tents make lousy screens). However, I am hoping to show even more images and maps than in previous iterations of the class.
Posted by Patricia of Trakai at 2:30 PM No comments: